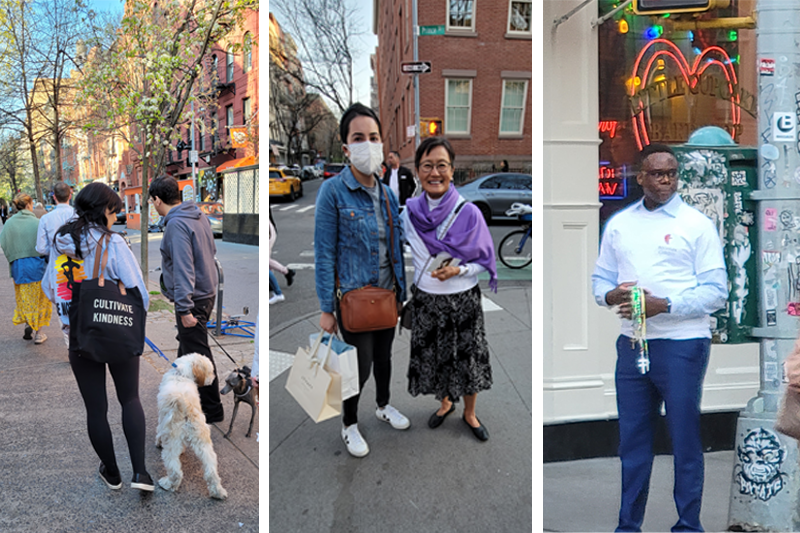 “And my soul shall live for Him, my children serve Him.
They shall tell of the Lord for generations yet to come,
Declare His faithfulness to peoples yet unborn:
These things the Lord has done.”

Prince and Mott, St. Patrick’s Old Cathedral.  As long as we’ve done this now, I remain incredulous how the kinds of soul-baring discussions with perfect strangers on the streets of New York can possibly happen.  Maybe this is why the Lord calls such obviously inadequate missionaries as our little band clearly is; to increase the faith of all of us in His continuous presence and movement.  Today, on Good Friday, the Holy Spirit seemed to take off the veil and just flat out jump into the action with us.  With 20 or so joyful missionaries out on the streets, and two more in the Basilica, our three priests were busy hearing many “first confession since confirmation” confessions through the long afternoon and evening.  One of them, moved deeply by the experience of so many souls seeking God and wanting to re-start their journey to Him, told me later, “Steve, I brought my breviary with me thinking I’d get a chance to log a lot of prayer time in there.  All I managed was ½ a Psalm!  And many of the confessions, once they got going, became a kind of flood of contrition, mercy, and Grace.  The penitents were clearly moved, but more so, I was moved.”

As usual, I have more stories to tell than I have time to write them, and the back of the church crew hasn’t even had time to report in, other than with this, “Steve, my goodness!  We brought so many into reconciliation today!  It was a flood!”  Mike, a joyful new Lumen missionary from Connecticut, steps into busy Prince Street and bags Eric, driving past on a moped.  (Bob, by the way, that was a first in over 12 years of doing this!)    The on-fire Jersey shore team, out on Mulberry, reported they’d given away all the rosaries they’d set out with, replenished several times from HQ– and almost all of them were to Catholics deeply appreciative who then headed to the Basilica for prayer.  After this,  I checked my rosary supplies when I got back to HQ and realized that of the 3,000 or so rosaries we’d started the week with, we’re now down to a few hundred.  If necessary, tomorrow we’ll fall back on our Immaculate Mary medals….  A good missionary always has a Plan B.

Sister Coco Gets a Hug

About mid-afternoon, a well-dressed middle-aged couple stroll by.  They’re Catholic.  Earl and CoCo.

“This is wonderful what you guys are doing!  We’re both good Catholics.  Love the Faith.  Thank you for the rosaries!”

“You’re welcome.  What color would you like?”  As the missionary untangles the desired rosary, he pops the question, “Hey, by the way, have you gotten your Easter confession in yet?”

“CoCo, that’s terrific.  That’s what we call a daily examination of conscience.  It’s one of the key paths to advancing in the spiritual life.  Keep that up!”

“By the way, do you know what the next step to advancement is?….”

“No, no.  I’m telling you, I really don’t need confession.  I’m talking to God directly.”

“And how do you know he forgives you?”

“Saint Coco, you’ve got something very good going on here.  Let me ask you something I struggle with.  I think you could help me.  Sometimes, when I talk to God, I have a tendency to rationalize a little bit about some things.  ‘Well, that’s not so bad, really.  That’s probably ok.’  So I go on doing them, and then it’s just a small step towards something related, that’s a little worse but also starts to seem ok.’”  How do you avoid doing this, Saint Coco?”

“Brother Steve, please call me Sister Coco.  Well, you’ve got a good point there for sure.  I hadn’t thought of that.”

“Husband Earl, what do you think.  You are Sister Coco’s husband, right?”

On we go.  Gradually, Sister Coco comes around to the idea that she could use a nice, light power wash before Easter.  But not this minute. She’s struggling to get over the finish line.

“I promise, Steve.  We’ll be back tomorrow.  Promise.”

We have a big, three-way hug out there on Prince and Mott, and then Brother Early and Sister Coco head out into the day.  We pray they’ll be back tomorrow….

Alejandro Gets Boomerang-ed by the Holy Spirit

One of the delightful Holy Spirit maneuvers that the street missionaries get to experience, especially on Good Friday is what we call “the Boomerang Effect.”  All-day long, wave after wave of folks stream south down Mott Street, many bearing a rosary.  Many of these are sporting what we call the “Confession Glow”, that fresh, light glow souls bear after just being infused with the Grace of God.  Some of them though, bear what we call the “Face of Regret.”  They’ve just been to the Basilica.  They’ve been praying.  They’ve been moved deeply by the lines at the confessionals.  Maybe a church missionary has even offered them help in preparing a confession, but somehow they’ve managed to turn all that down.  They feel unforgivable, unlovable, or maybe just not “ready”.  But to escape God’s grace, there is one last hurdle.  They have to get past the Holy Spirit’s crew on Prince and Mott.

Joe attempts to hurry by.

“Joe, did you get a chance to get to confession?  You look like you could use confession.  Why don’t you give it a try.  These missionary priests we have are incredible.  Everyone who confesses with them just comes out glowing.”

“How did you know I needed confession?  Do I look guilty or something?  Ok, you’re right.  I’m going to do it.”

Joe heads back in.

An hour later, Isabella, a well-dressed young woman in her early 30’s,  walks by us, rosary in hand.  But she’s in a hurry, and the two missionaries are engaged with others.  She hurries past.  Five minutes later she’s back, sobbing.

“I just need to tell you something.  Please thank those missionaries out in front of the church for me.  I wasn’t going to go in, but they convinced me to.  I had such a beautiful experience there.  I was so moved.  So moved.”

“Did you get to confession?”

“No, but I was really very, very moved,” she sobs.

I am quite certain Isabella will be back.

Alejandro emerges with his girlfriend from the church, rosaries in hand.

“Well, no, I didn’t get to confession.  Should I have gone, do you think?”

“Well, listen Alejandro.  It’s Good Friday.  We’ve got the most amazing missionary priests back there.  And God already knows what you did.  He’s just waiting for you to come back and tell Him you’re sorry.  Then he’s going to give you one of his big God-hugs.  Let me tell you, there’s nothing like getting a big God-hug in the sacrament of reconciliation on Good Friday.  There is NOTHING LIKE IT.”

“We’ve got a dinner reservation.”

“We’re going to let a dinner reservation get between us and a ‘God hug’?”, their eyes tell each other.

Alejandro gets boomeranged.  Back in he heads.

Another 30 minutes or so later, Maria arrives.

We hadn’t said anything yet, beyond, “Are you Catholic?”

She continues.  “Thanks to you missionaries, I experienced a great miracle in my life.  You changed the entire course of it.”

Both missionaries are standing there, now glued to the pavement.  “Please, tell us your story.”

“Four years ago, some of your missionaries talked me into visiting the church.  I was having a very tough time.  Something had happened to me, something very violent, several years earlier.  To that day, I still could not taste or smell anything.  I had come back to the Church, but not to confession.  It was a Good Friday, like today, and I was fasting….”

“..  In the back of the church, there was this pretty Asian woman who gently asked me if I’d like to go to confession.  I told her no thank you, but she stayed with me.  Gently, she talked me through how to do it.  And, incredibly, I did.  I went into that confessional.   And the priest in there was also very gentle, almost a mystic I thought.  We chatted for a long time.  And then at some point, the dam just broke.  I let it all out.  Everything that had happened, and why I couldn’t forgive the person who’d done that to me.  And he told me that to receive forgiveness, I had to forgive as well.  I’ve never forgotten that.  And in that moment, I finally forgave that man that had almost killed me.  I learned how to forgive.  And I felt a flood of grace enter me….”

“… A few days later, I was walking through the neighborhood here, and I passed a candy shop.  And as I passed, I smelled the chocolate.  I thought for a moment I must be imagining smelling the chocolate.  So I started testing myself, sniffing all over the neighborhood.  It was true!  I had my sense of smell back, my sense of taste.  The whole works.  It was a miracle!”

At that moment, the missionary in the back of the church happened out to the corner, sporting her big smile, as usual, to deliver another new missionary recruit to us.  Maria turned with a big smile.  “That’s her!  That’s the woman!  She’s still here!”

“We have more news for you, Maria.  Not only is she still here.  I’m pretty sure the priest you described is Fr. Shawn, and he’s still here.  He has another job now, down in Atlanta.  But for some reason, he found his way to SoHo today. He wanted to hear confessions here at Old St. Pat’s.  So he’s here too.  Waiting for you.”