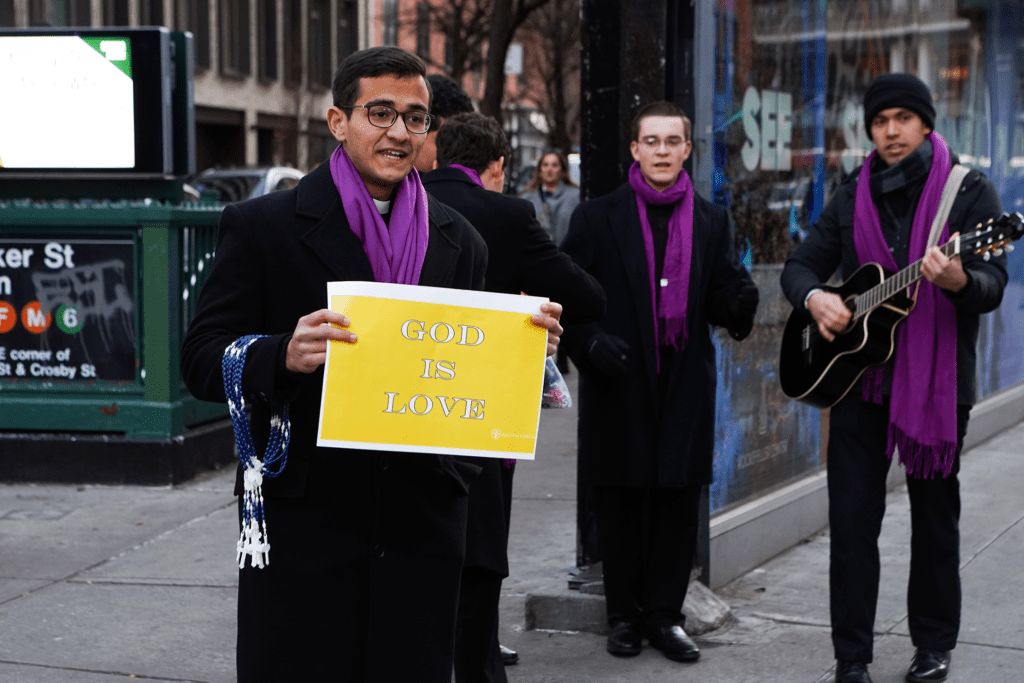 Bleeker to Broome, SoHo. One of the joys of having the brothers with us for a mission is their sheer numbers allow us to blanket the parish, creating a kind of “Jesus Buzz” throughout SoHo. As I made the rounds from our northernmost outpost on Bleeker St, near the border of Greenwich Village, to our southernmost station down on Mott and Broome, at the gateway to Little Italy, the spiritual energy in the air was palpable. On one side street, a young couple walked by me in the other direction, and as they were doing so I overheard this snippet of conversation, “Well, I said I wasn’t Catholic but I guess I really am.” A seed planted, perhaps.

The brothers themselves have many stories. Here are three, in their own words.

A Lady with a Rosary

Crosby and Prince, SoHo. A lady, I don’t remember the name, said she was raised as a catholic but had never lived it until one night three years ago. That night a brother gave her a rosary, invited her to confession and she fell in love with Jesus. Since that night she goes constantly to Old St. Patrick’s. We gave thanks to God together for that grace and had a wonderful conversation about the faith. We did not do anything, but we saw the fruit of what another brother did three years ago and had probably no idea.

Mulberry and Spring, SoHo. I was very excited about the missions in New York, we were some brothers singing Christmas songs on a street corner, and I was holding a sign that said, “Come and see.” Suddenly a man approached me and made a gesture of being interested in my sign. Then he smiled and tore my sign. He kept walking, and I lost sight of him. I was angry, yet I was also deeply grateful for his action because I felt in my flesh what Jesus felt when he was rejected and avoided. This taught me to grow in mercy and forgiveness and to love this society that Jesus wants us to evangelize. It is a difficult mission, but the world definitely needs it. And at least the sign fulfilled its mission. The angry man “came and saw,” and I am sure that at least something moved in his heart. With that, I am satisfied.

Mulberry and Broome, So Ho. We were 30 min trying to speak with someone, it was cold. Suddenly a woman stopped when we asked her if she was Catholic. She said Yes. Then we asked her if she had any intention she wanted us to pray for; she said, please pray for my husband, who passed away seven months ago because of Covid. She has two little daughters. She said she needed the prayers because it had been hard to overcome her husband’s death. I had a feeling that the 30 min with no one stopping to listen to us, were the seed to have this lady sharing what was inside her heart.