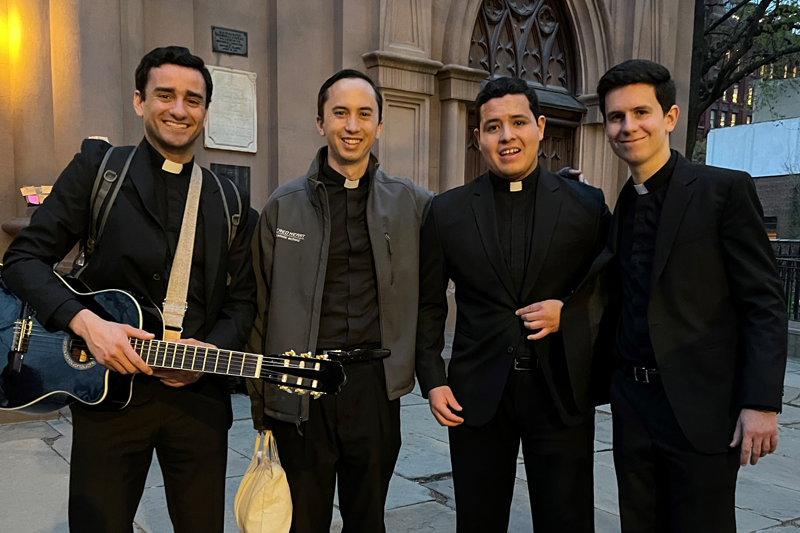 St. Patrick’s Old Cathedral, SoHo.  On a beautiful warm and sunny spring day, our little missionary team of ½ dozen lay missionaries and 2 dozen joyful seminarians, headed south to our old stomping grounds, the increasingly trendy neighborhood around St. Patrick’s Old Cathedral.  Some things had changed since our last Holy Week mission three years ago.  Chief among these: less foot traffic, with the usual European tourists in particular in short supply, and fewer missionaries, including some of our old stalwarts who couldn’t make it this year, and fewer than our usual supply of brothers.   (Largely a good thing, by the way—several of the brothers, and a few of our lay veterans, had during the pandemic begun missions in other cities with less severe Covid lockdowns.)   On the other hand, certain things had not changed at all:  the great Basilica, stood as firmly and beautifully as ever, towering over the neighborhood and reminding us all that the Lord is here; many of the old neighborhood regulars strolled by at some point, welcoming us warmly; and, probably not surprisingly, the so-called “power corner” on Prince and Mott remained mysteriously graced with a spirit and vitality that seemed to draw souls to us.  Our five priests hearing confessions were kept busy all night.  That didn’t change either.

As I reflect on my stream of notes from a slice of the encounters we had last evening, I’m struck by this common theme:  we simply loved them in, with a sprinkling of humor when called for.  And with that, we received a whole lot of love back.  Funny how love works….

We encountered a host of folks that at first were taken aback by our “Are you Catholic?” pick-up line; many retorted sternly, “No, I’m Jewish.”  With the Passover nigh, our natural comeback was a joyful “Well, Happy Passover then!”, which seemed to take most by surprise.  One woman, after then posing a moment to get her grip, turned back to one of the missionaries with a big smile on her face.  “And Happy Easter to you!”

Some of the Catholics were reluctant to tell us they were Catholics, but on the other hand, couldn’t bring themselves to say they weren’t.  Common replies were a very reluctant, and somewhat suspicious, “Yeaaaaaaaah, sort of….”  Once they realized the rosary was a gift, it was hard to turn down.  “How about lighting a candle for your Mom?  We’re trying to build a cross of candles in the church and you could really help….  You’ll be in and out in two minutes!”  Most of these ended up in the Church.  One particularly animated conversation with a 20-something young man on his way home ended with him taking the candle and heading in with this last thought, “Ahh, f_ _ _ it!  Why not?”  We’re not sure whether the missionaries in the back of the church hauled him into confession or not, but we prayed they did… 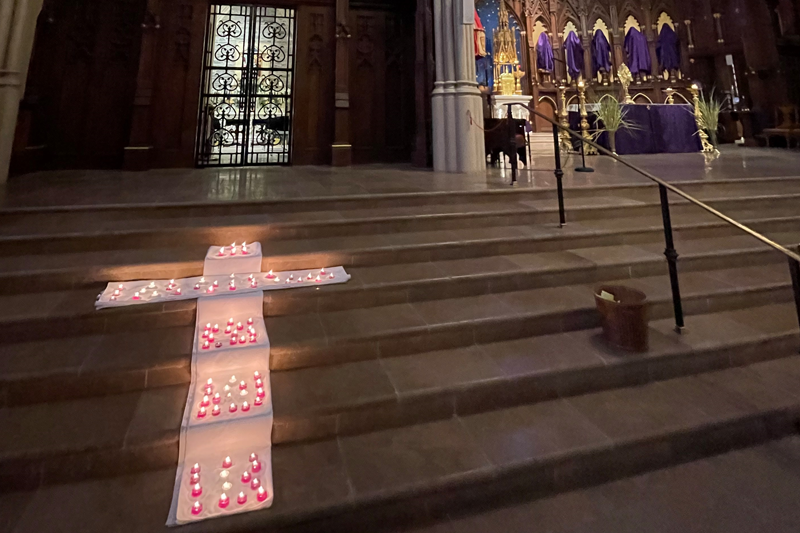 The Jewish passersby were not the only people of other faiths who left the power corner joyful.  We had multiple encounters with a variety of “Christian not Catholic” souls who were all surprised and delighted they were welcome to come into the beautiful Basilica to light a candle and say a prayer.  One such pair of stylishly dressed 40-somethings emerged 30 minutes later, almost floating with joy back towards us.  “Wait for a second, ladies, did you go to Confession or something?  You told us you weren’t Catholic!  So you were after all!”  “Yes, I am though Linda is not….  And that was the best confession of my life!  Those priests you have there are really incredible.”

The brothers’ teams had, by their reports, their best evening ever in SoHo.  All five of the teams returned to HQ before Mass, with empty mission bags, which had left four hours earlier stuffed with rosaries and candles; all told us they’d had to refill the bags more than once through the long afternoon.  The cross team’s cross was covered with prayer notes, which are now all safely back in the seminary where they will be incorporated into tonight’s Mass of the Lord’s Supper.  The hymn team showed up at Prince and Mott to serenade the passersby at around 5:00, and “business” instantly picked up.  The brothers are so joyful and full of faith, it’s just really tough for even the most hardened atheist in town to not send them a loving glance.

Several of the neighborhood regulars dropped by, renewing acquaintances after our three-year drought.  Things picked up right where we left off…  “Can I have a blue one this year please?”   “Before you ask…  I just went to confession!  Thank you!”  And then the capper:  two of the Hispanic residents, who’d been taking our rosaries for years but had never relented on the Confession thing.  One had to wait with one of the missionaries on the corner for about 10 minutes; he’d called his friend on the phone to come to get a rosary and the friend was delayed.  “Jorge, por favor!  El Dio de la Resurrection!  Ahora!  Ahora!  Es possible a confession en espanol!  Por favor!  Diez anos, por favor!”  (For you Spanish speakers, let me translate the missionary’s broken Span-lish:  “George, please!  The Day of the Resurrection is coming!  Now’s the time!  You can confess in Spanish!  Please!  For goodness sake!  Ten years!”)  Honestly, having worked on Jorge for the last decade, the missionary wasn’t expecting what happened next.  But it happened.  Jorge finally arrived.  And after a brief, somewhat humor-inspired discussion with the crazy missionary, they both headed with him to the church and confession.