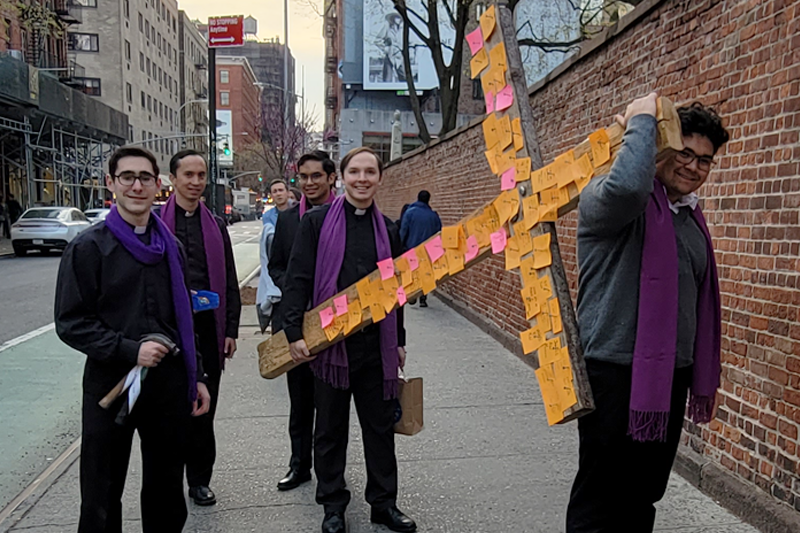 Corner of Prince and Mott, St. Patrick’s Old Cathedral, SoHo.  There are days to harvest, and days to sow.  Today was a day to sow.  Holy Thursdays are often like this.  The great Easter holiday can creep up fast on people, and even as late as Holy Thursday we are not always as focused as we could be on preparing to be ready.  We’d rather treat this day as the beginning of a wonderful three-day weekend, sort of like the Memorial Day weekend of the Spring.  But it’s a lot more than that, and most Catholics know that even when they forget it or want to forget it.  So nothing like a pesky missionary to plant a few seeds; the fields are ready.  Here are a few of the seeds that were sown yesterday…

Miguel, a neatly dressed and groomed 40-something young man moves hurriedly past the corner.  A missionary pursues him.

“How did you know that?”

So begins a long encounter on the streets.  Miguel won’t go into the church, to Mass or to confession, or even to pray.

“I left the Church years ago….  I was 13.  My mother yelled at me for wearing a tee-shirt to Mass.  I felt like everyone there was at a fashion show.  It seemed fake to me.  I’ve never been back since.  But I’m still connected.  I just have my own relationship with God now.”

“That’s wonderful!…    Let me ask you something.  How do you know what he’s saying to you?  Do you ever find yourself thinking he’s saying something but really it’s just you rationalizing some bad behavior or other?”

“How did you know that?”

“Because I’ve been there myself.  That’s how….”

“Tell me about your Mom.  Is she still alive?”

“Yes, and I love her dearly.  But I’ve never forgiven her about the dressing up for Mass stuff…”

“Miguel, let me ask you a question.  Think for a moment about a time in your life that you felt the Lord was asking you to do something, or even to Not Do something.  How did you feel after you did what he wanted?”

“And how about when you did what he didn’t want?”

Miguel, think about the situation right now.  What do you think he’s telling you?

“That I should go into that church,  and light a candle for my mother.”

“What are you going to do?”

“Well, I’m in hurry right now to get to dinner.”

“Steve, you’re right.  I need to go into that church.  I promise you, I’m going to do it sometime tomorrow.  I promise.  Just not right now.”

“Miguel, the Lord will be waiting for you.  He wants you to come home.”

The encounter ends with a deep-felt and warm hug, out on the corner between what 15 minutes earlier were two perfect strangers.  As Miguel walks briskly off, he turns his head one last time and locks eyes with the missionary, with a warm smile on his face.  The eyes say it all.

“Thank you.  Thank you for being there for me tonight.”

Three young women in their late teens go giggling past one of the missionaries.

“Are you Catholic, ladies?”

They giggle back, with a French accent.

They each take a rosary.

“Where are you heading?”

“Ladies, where do you live?”

“Westchester, with our parents.  We’re just in SoHo for a visit.”

“Ok. Here’s the plan.  I want all three of you right now to march into that church and light a candle for your parents.  And when you get home tonight, where your fathers will be waiting for you, they are going to ask you what you did.  And you can tell them, ‘We visited St. Patrick’s Old Cathedral and lit a candle for you and Mom.’  What do you say?”

So into the Basilica, they walked…

Out on Prince and Mott, a young man from the neighborhood zips by two missionaries.  He takes a rosary and lets us know he’ll be coming to Mass on Easter.

“That’s awesome John.  Can’t wait to see you there….  Incidentally, have you been to confession lately?  You look like you have something to confess.”

An energetic and lively discussion of the Faith ensues.  John takes down the times for confession tomorrow.  He’s coming.  He has something to confess. 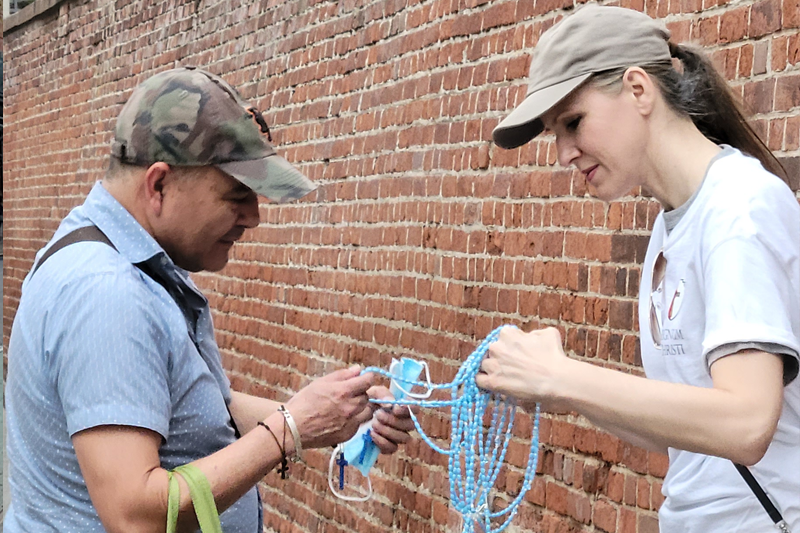 The Power of Family

It is common these days to feel the institution of the family is under attack in our culture, and of all places, in trendy SoHo.  So here are two stories from our missionaries in front of the church that say something different….

St. Patrick’s Old Cathedral, Front Gates, So Ho.  A mother and daughter are happily strolling by on Mott.  One of our missionaries reminds them it is Holy Week, and invites them into the church for a visit.  The daughter, joyful and excited, pulls Mom to a stop, and the pair strike up a lively conversation with the missionaries in front of the church.  The daughter is a real live-wire and a leader.  When the delicate topic of confession is broached, she’s all in.  “Yes, Mom!  That’s exactly what we should do!  Easter is coming!”  And so into confession they walk.

Later, as they leave the church, they have an extra skip in their step and are full of joy and gratitude.   We share hugs, and then they dance off into the glorious afternoon sun.

Later, a father with his twin daughters arrives.  Both girls are age 10.  We greet them, and they smile back with broad smiles.  They happily accept our invitation for a church visit.  We give each girl a rosary on their way in.  “That’s their first rosaries!  Wow!”, exclaims the father.    The “Family Day Outing” was now stepping into Church, and Dad was bringing them through the massive front doors—- the girls lit up as if they were seeing the Wizard of Oz!    Dad shows them the Holy Water etiquette, then takes them quietly into the church for a prayer. What a delight to see what Fatherly love looks like on this perfect Spring day.  This little encounter charged us up for another hour!

The missionaries in front of the church

An Elderly Gentleman is Brought Home by a Young Brother

Our young seminarians had an amazing Holy Wednesday in SoHo this week, reporting that it was their most fruitful ever.  As noted in “Loving them home”, the brothers ran through a vast quantity of our supply of rosaries!  Here’s one story reported about the brothers from our crew in front of the church….

St. Patrick’s Old Cathedral, So Ho.  Just prior to 7 pm Mass a seminarian points out a man to me who was leaving the Basilica.  This elderly and tired gentleman shared his story with him that moved him greatly:  that morning he was sad, lonely, and contemplating suicide.  He came out for a walk to shake it off and ran into some of our brothers on the street.   They had a deep conversation and then led him into the church.  He emerged out an hour later,  smiling and steady.  The seminarian pointed him out, and shared with us his story.  The young brother told us worriedly that the old man’s next Social Security check was still two days away, and his funds were short…

The “full service” missionaries in front of the church had earlier that night dog-sitted for a visitor who’d thought she was just walking her dogs when a missionary waylaid her.  So this was nothing!  We happily sent the elderly gentleman off with dinner funds, and more importantly, a warm heart.

Probably almost as warm as our hearts after witnessing the fruits of this encounter by the brothers.

The missionaries in front of the church